GUEST BLOG: The changing face of Iran: from theocracy to democracy?

THE nuclear agreement between the US and Iran struck last week has been hailed as ‘historic’ by president Obama and was greeted with wild celebrations on the streets of Tehran.

But what might it ultimately mean for Iran’s revolutionary regime?

Almost every revolution is stymied by a return to the old order. Russia in 1917 and China post-1949 were initially adamant that they could keep aloof from the world community, and faced severe hardships for doing so.

The Communist revolutions were based on the ideological concept of economic equality for all people, and the Iranian revolution was based on religious beliefs: to live life under divine laws.

All survived by using coercive measures against their own people and millions suffered torture, indefinite jail terms and death as a result.

Slowly, both China and Russia realised they would have no option but to work together with other countries, particularly in the West. Today, both are open to world trade and everybody is benefiting.

Iran is now at a similar crossroads, but with the added impediment of being situated within the vortex of Middle Eastern politics.

The perception of Iran in the recent past has been that of a custodian of anti-American forces in the region, attempting to forge its own empire containing Syria, the Palestinians and Hezbollah as allies.

While the US was bogged down in Afghanistan and Iraq, this image, along with help from Russia and China, helped keep the regime's credibility intact and Iran’s economy ticking along.

However, ever since it was placed under sanctions its oil income, together with material benefits from world trade, has reduced substantially. More importantly, Syria has imploded. Assad is a vital ally and, if he were to be toppled, it greatly harms Iran’s politicalinterests in the region.

These factors have conspired to cripple Iran’s economy and have led its citizens to lose patience with the regime.

In order to achieve its objectives – continuing development of nuclear technology, the lifting of sanctions and retaining its legitimacy – it was imperative for the Iranian regime to revert back to the pre-Revolutionary stance of dealing with the US around the negotiating table.

This in itself demonstrates something of a policy volte face. Is this a sign of things to come?

Most Iranians want Iran to work with the world community for their country’s economic benefit.

Iranians, since the Shah’s time, have been charmed by the lifestyle of the West. I believe that the majority would like, if not a turning back to the old time openness, at the very least to be open to interactions with rest of the world.

It is inevitable, as time has proved, that no system can sustain rule by force indefinitely. People want to be free, Iranians are no different.

Will of the people

Whatever the central theories of Communism, or those propagated by Iranian mullahs, my presumption is that they cannot prevail indefinitely against free will or, put another way, the eventual will of the people.

This is a problem faced by all kinds of revolutions, the threat of insurrection from citizens who feel they are being held hostage.

The position of Iran following the Islamic Revolution has similarities with both the Russian and Chinese ideal of government, particularly in the control of its people.

The elections for the President of Iran and the Iranian parliament are, in many ways, a mockery of a true democratic arrangement between the voting system and the electorate.

It is a democratic facade where opposition candidates are handicapped by the Guardian Council, which is the sole arbiter of who may stand for election.

This maintains the revolution’s power-base and ensures the continuance of an Islamic style government avoiding any secular trend in the country.

This theocratic and anti-democratic approach to ruling the country has stymied social progress and curtailed individual freedoms. The most noticeable aspect of this regressive ideology can be seen in the country’s attitude towards women, who do not enjoy the same freedoms as men.

However, there has been some social progress as the regime has lifted many religious mandates directed at women who have more freedoms than previously.

The success of the nuclear negotiations is also a sign of progress.

Iran, like Russia and China before it, is moving forward toward domestic modernity and a wider embrace of international values.

While Russia, China and Iran may continue to find it difficult to throw off the clinging residue of their revolutions, it is only through a genuine embrace of the spirit and ideals of democracy that these countries can take their respective places as equals in the world’s family of democratic nations. 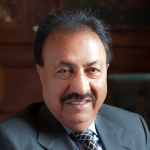 M.B. Abbasi served as Pakistan’s Ambassador to Iran from 2008 to 2010 and was also appointed special envoy to the US. An ardent advocate of peace in the Middle East, Mr Abbasi is currently working on several projects to enhance diplomacy in the region. Photo: Isabelle Plasschaert