Memo to James Purnell: will you take religion seriously? 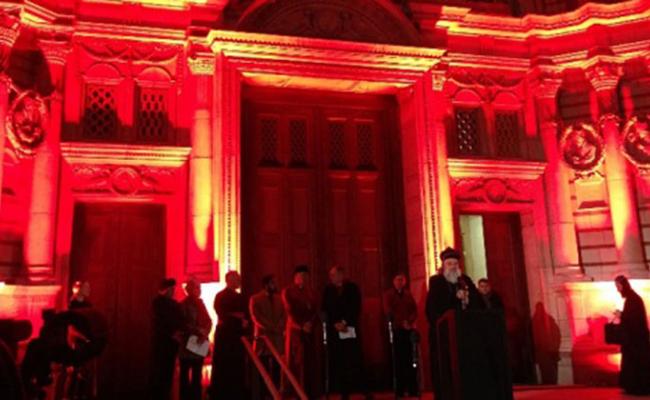 Syriac Patriarch Ignatius Ephrem II addressing the crowd on Red Wednesday this week, when Westminster Palace, Abbey and Cathedral were lit up in red for the blood of persecuted Christians.

THE SUNDAY TIMES may be running a piece this Sunday that goes along the lines – purely invented by the reporter – that Christians are furious, following the departure of Aaqil Ahmed, at the incorporation of religion into the brief of a non-specialist executive James Purnell because it is bound to mean less Christianity on the telly.

If the story does run, you have heard it categorically from me first that there is no fury; there is no idea what kind of head of R&E Purnell is likely to make; and there is no story.

Even though I may be quoted saying something along the lines of ‘From the looks of it, James Purnell has as much religious literacy as my finger-nail’ - yes, I said that – there is no story.

The point is, we just don’t know.  James Purnell looks clever, interested and competent.  It is an important appointment, yet he has never made a programme, I gather, and there is no evidence whatsoever of his interest in religion.  What we all want therefore is assurance that the BBC under Sir Tony Hall is taking religion seriously.  We have no evidence yet that he is, but he might be.

What I certainly did say to Nicholas Hellen – whose interview technique is pretty much like Chinese water torture: a drip drip drip wearing you down to the point where you would say anything to get rid of the pain – was how interesting it is that the former Cabinet Minister, Blue Labour member and leader of a left-leaning think tank the IPPR, has been appointed with a brief that joins up radio, education and religion.  That could be significant.  Might it just mean that BBC producers and editors across the institution will be expected to learn about how religion impacts all our lives to some extent?

That is all Lapido and others like the Sandford St Martin Trust want: a renewed commitment to reflecting how the numinous impacts ordinary lives in all sorts of ways; the same ordinary people whom the elites have so abjectly failed for a whole generation right across the Western world.

That also interestingly is what Muslims want too.  It is partly why they are so angry: they feel that their god has been humiliated by a civilization that despises the things of religion.  They will not stop until their faith in him is absolutely vindicated.

There was something else I read this week that reflects this fury.  The biannual Religious Freedom in the World Report by the very determined Catholic charity, Aid to the Church in Need, has a foreword by Father Jacques Mourad, a monk who was kidnapped by ISIS in 2015 and escaped after five months.

He wrote:  ‘Our world teeters on the brink of complete catastrophe as extremism threatens to wipe out all trace of diversity in society.’  That is very frightening and very real.

Yet he remains committed to Syria.  He adds:  ‘I am convinced that over the past years, our commitment to help all the needy of the region of Qaryatayn – both Christians and Muslims – was the reason why 250 Christians and I were able to make it back to freedom.’

He attributes his escape to the help of a Muslim friend from the region.

Every department of the BBC, and every newspaper, needs all its journalists and producers – not just the specialist few - who are able to make this same distinction.  That is religious literacy.