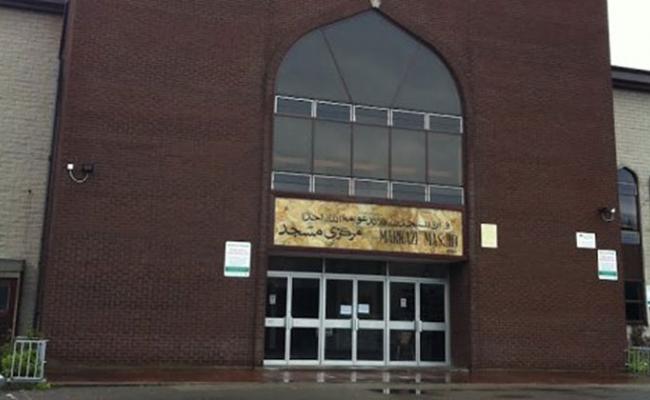 The Markazi Masjid in Yorkshire, England, is one of the largest UK mosques, holding 4,000 worshippers.

SOME UK mosques have struck out against proposals by Government for regulation of Islamic madrassas, or religious supplementary schools attended by children after their regular instruction.

Mr Cameron warned that some Muslim children had ‘their heads filled with poison and their hearts filled with hate’ in the madrassa environment.

He called further for a halt to ‘teaching intolerance’.

According to BBC News, there are 2,000 madrassas in Britain.

Many are large, elaborately-managed institutions, but the country also has numerous small madrassas.

None is directed under Government guidelines.

Government intends to require a registry and open inspections of facilities providing intensive teaching outside the regular schools.

Regulation of the madrassas would include prevention of indoctrination in radical ideology as well as in attitudes opposed to British social cohesion.

The authorities would ban corporal punishment, require protection of child safety, and enforce strict standards for suitability of staff.

Sanctions against offending madrassas may include a shutdown of their operations, and barring individuals from working with children.

Inspections would be based on risks reported by parents and children or observed in random visits.

In addition, the UK Office for Standards in Education, Children’s Services and Skills (Ofsted) has advocated closure of illegal and unregistered schools.

With the period for input on the proposals ending on 10 January, BBC News reported that a substantial group of mosques had come out against the programme.

The Northern Council of Mosques, which comprises 400 places of worship in Manchester, Bradford, and other cities, declared that regulation of madrassas would violate religious liberty.

The group denounced what it described as ‘the flawed assumption that radicalisation takes place within some madrassas’.

Moderate, traditional, and spiritual Sunni and Sufi Muslims in Britain are aware, however, that radicalisation is indeed a danger in madrassas.

The most serious problems are found in madrassas controlled by the Saudi-based Wahhabi sect and the South Asian Deobandi strain of Islam.

Both Wahhabis and Deobandis claim to act in the interest of all Sunni Muslims but emphasize separation from Muslims with whom they disagree and from non-Muslims.

Deobandism is widely represented in Britain, based on the large share of the Muslim community that emigrated or are descendants of emigrants from the Indian subcontinent.

The Northern Council of Mosques has further protested the Government suggestions by arguing that ‘extremism’ is a vague concept that may be ‘all-encompassing’.

Once more, the presumption of the Government’s opponents seems to be that ordinary Muslims are ignorant of the crisis of radicalism in the global Islamic community.

Wahhabism inspires the violent terrorism of the so-called ‘Islamic State’, and Deobandism is the creed of the Taliban.

There is nothing vague about the fanaticism of these groups.

Their views are not ‘all-encompassing’ in the sense of representing Islam as a whole.

The Northern Council of Mosques complained that ‘faith providers [instructors] may simply avoid … open conversations with children for fear of being labelled extremists themselves’.

Yet again, this claim appears dubious.

In radical madrassas, such as those run by Wahhabis and Deobandis, ‘open conversations’ are absent.

Madrassa schooling in the Wahhabi and Deobandi style involves memorization of Qur’an and learning Arabic, with little in the way of debate.

It would be surprising to find students in Wahhabi or Deobandi madrassas who had absorbed enough knowledge about Islamic doctrine to engage in serious dialogue with their instructors.

Such madrassas do not teach ‘critical thinking’.

Its ‘Preamble’ consists of nothing more than the following citations from Mr Cameron’s 14 October Conservative Party conference speech.

At that time, the Prime Minister said that ‘in some madrassas, we’ve got children being taught that they shouldn’t mix with people of other religions; being beaten; swallowing conspiracy theories about Jewish people’.

Mr Cameron elaborated: ‘If an institution is teaching children intensively, then whatever its religion, we will, like any other school, make it register so it can be inspected …if you are teaching intolerance, we will shut you down’.

By highlighting its objections to these comments, Keep Mosques Independent conveys to Muslims that it considers separatist and hateful doctrines legitimate.

The message from the opponents of the Government’s intention is that ‘independence’ of the mosque and madrassa means that Wahhabi and Deobandi leaders are entitled to define Islam for children under their care.

Moderate, traditional, and spiritual Sunni and Sufi communities in the UK should welcome Government regulation of madrassas.

Sufis in particular are aware that Wahhabi and Deobandi preachers incite impressionable young Muslims against them.

Worse, the atmosphere of grievance in these madrassas leads young believers to go far away for participation in such groups as ISIS.

Dr Irfan al-Alawi is International Director of the Centre for Islamic Pluralism, and Visiting Fellow of the Woodrow Wilson International Centre for Scholars in Washington.  He is a regular contributor to Lapido Media.