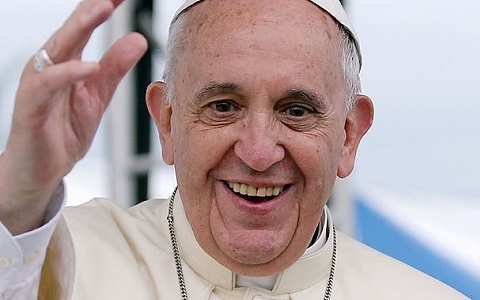 POPE FRANCIS has enriched the global debate over ecological concern with his Encyclical Laudato Si. He has also stirred controversy.

An encyclical is an authoritative papal letter, generally addressed to all the world’s bishops. Francis has broadened its scope.

He notes that Pope John XXIII ‘addressed his message Pacem in Terris to the entire “Catholic world” and indeed “to all men and women of good will”.’ His own encyclical addresses an even wider audience:

‘Now, faced as we are with global environmental deterioration,’ he writes, ‘I wish to address every person living on this planet.’

The situation, in his view, is urgent. John XXIII spoke to people of good will at a time when the world was ‘teetering on the brink of nuclear crisis.’ Pope Francis regards the current world situation as no less dire, writing, ‘I would like to enter into dialogue with all people about our common home.’

Pope Francis takes his title, ‘Laudato Si’ or ‘Praised be’ from his namesake St Francis’ Canticle of the Creatures.

St Francis in his Canticle sings, ‘Praised be You, my Lord, through our Sister Mother Earth, who sustains and governs us, and who produces various fruit with colored flowers and herbs.’

Despite the urgency of the earth’s situation, there is a poetic innocence to Pope Francis’ use of his namesake’s Canticle to give context to his plea for the preservation of the natural world.

But that plea is controversial. While those in the environmental movement worldwide welcome it, conservatives who doubt the theory of global warming – or celebrate the global market economy and consumerism – see the Pope’s encyclical as a radical attack on core values.

Ross Douthat in the New York Times notes the encyclical ‘includes, as many liberals hoped and certain conservatives feared, a call to action against climate change.’

It also contains, as many liberals feared and many conservatives will take comfort in, a clear statement of the Catholic church’s continuing position on abortion. ‘Since everything is interrelated,’ Francis writes, ‘concern for the protection of nature is also incompatible with the justification of abortion.’

‘How can we genuinely teach the importance of concern for other vulnerable beings, however troublesome or inconvenient they may be, if we fail to protect a human embryo, even when its presence is uncomfortable and creates difficulties?’

Both climate change believers and doubters, and pro-choice and pro-life factions, will find their own concerns addressed in this encyclical. Pope Francis offers both liberals and conservatives something to applaud and something to trouble them.

This brings us to the heart of the encyclical. Francis quotes Pope Benedict XVI, who ‘observed that the world cannot be analyzed by isolating only one of its aspects, since “the book of nature is one and indivisible”, and includes the environment, life, sexuality, the family, social relations, and so forth.’

‘It follows that “the deterioration of nature is closely connected to the culture which shapes human coexistence”.’

Both the environmental and pro-life strands in Francis’ encyclical stem from his view of the unity of God’s creation, and the human role, created ‘in the image of God’, within it. It is this unified vision which makes the encyclical both welcome and disturbing to many on both sides of some of the great divides of our time.

This in turn begs the question, what happens when an influential world figure of undoubted moral stature crosses the lines that usually separate opposing camps? Does he lose respect on both sides? Or does he begin to build a bridge between them?

There is no doubt that the encyclical is ‘about’ ecology and that Francis’ thoughts on the sanctity of life are a secondary issue in the encyclical, giving his environmental concerns a human and spiritual context.

The theology of concern for the earth has a long history. From a Christian point of view, a great deal hinges on the meanings of the word frequently translated as ‘dominion’ in the first chapter of Genesis.

In Genesis 1.28 in the King James Version of the Bible (KJV), God calls on man to ‘have dominion over the fish of the sea, and over the fowl of the air, and over every living thing that moveth upon the earth.’

‘Be masters of the fish of the sea, the birds of heaven and all the living creatures that move on earth.’

And the same Hebrew word translated by the KJV as “have dominion over’ and the NJB as ‘be masters of’ is used in an earlier verse, Genesis 1.16, to describe how the sun and moon will rule over the day and night.

We are very close, here, to St Francis Canticle, with its praise to God for Sir Brother Sun and Sister Moon.

When Pope Francis' encyclical was introduced at the Vatican, Eastern Orthodox Metropolitan John of Pergamon gave a speech as a representative of Ecumenical Patriarch Bartholomew, calling it ‘an occasion of great joy and satisfaction for the Orthodox.’

It has long been the Eastern church which has taken an understanding of the sacred gift of the earth to its deepest and most profound levels.

Indeed, Orthodox theologians from St Maximus the Confessor down to the present day have held that the transformation of the earth is central to our human purpose.St Maximus explains the meaning of the world by saying, ‘that is why the Word became flesh: to open to us, through the holy flesh of the earth transformed into a eucharist, the path to deification.’ The world will become a “eucharist” – literally, a thanksgiving.

As man becomes less sinful and more like the Creator in whose image he was made, the world under his care becomes the paradise that has always been its destiny.

From a secular perspective, Pope Francis has made a powerful argument in favor of ecological concern, and the urgent need to protect our habitat and home, the earth – backed up with extensive scientific details. Perhaps disconcertingly, though, he has tied this argument to his stance against abortion.

From his own point of view, however, the principles and traditions underlying his Encyclical go far deeper. They touch on the sacred nature of the whole creation as well as humankind, in a vision that appeals at once to poetry and science, the complexity of the world and the profound purpose to which the human soul is called.